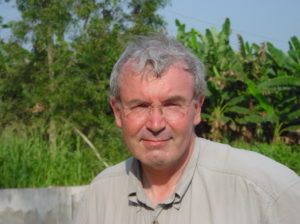 We got involved with permeable paving having installed pattern imprinted concrete for years,
We could see the difficulties in our climate. In this country we pave over more and more area’s every day. This adds to the issues the country is facing with flooding. Because of this we looked for a better system, Now many years later can say its far superior in every way to any other paving system on the market.

Professor John explains how he got involved with this system: “Tobermore was aware of the research we were doing at Newcastle University into permeable paving systems and came to see me in 2000 to ask my advice on developing a permeable paving product for them. I helped on two fronts, in designing the shape of the product and suggesting its name. Most of the others used the word aqua but I thought hydro was just as good and so it became known as Hydropave.”

“The Hydropave we developed for Tobermore has got real advantages over some of the other permeable paving systems. One of the main differences is that, as with all paving after a number of years it needs to be cleaned, and in many cases this means taking it out to clean the bed. With Hydropave, the joints between the paving are all that requires cleaning and so it can be done with a power hose, making life a lot easier for the owner.”

Professor Knapton also works as a consultant for world-renowned insurers, Lloyds Underwriters and it was in this capacity that he became involved in the World Trade centre investigation.

He explains:
“Lloyds were the main insurers for the Twin Towers and I had to find out if the way the towers were built and designed, contributed in anyway to their collapse after they were hit by the planes. I concluded that the way they were designed and built actually prevented them from falling over and thus would have saved around 100,000 lives which would have been directly in their paths had they fallen over. I was attached to the main investigation committee and its conclusions followed mine. The main implication of it all was that no one felt we had to stop erecting tall buildings. The only recommendation we made for the future of tall buildings was that instead of placing the lifts in one place, they should be positioned in all four corners of the buildings to give people a better chance of getting out in an emergency.”

John Knapton is a consulting civil and structural engineer having spent his career half in consulting and half in academia. In 2002, he retired from the Chair of Structural Engineering at Newcastle University to focus entirely upon consulting, whilst maintaining a Visiting Chair at Liverpool University. He graduated with a First Class Honours Degree in Civil Engineering from Newcastle University in 1970 and with a PhD in 1973. His early research work was into concrete block paving and concrete roads at The Cement and Concrete Association then following a brief period in industry, he took a lectureship at Newcastle where he researched heavy duty paving, concrete block paving and highway design. He prepared the world’s first design guides for heavy duty industrial pavements and for concrete block roads and advised product groups worldwide in the development of the technology of pavers.

During the 1980s, he established his consulting practice with offices in London and Newcastle before returning to Newcastle to take up the Structural Engineering Chair in 1991. During the 1990s, he developed design methods for permeable paving following his research using his full scale pavement test facility. This research has informed design information currently being disseminated by Interpave and by others.

He has written three books on ground bearing concrete and had developed the four editions of the British Ports Association heavy duty pavement design manual. He has advised BS committees in the development of paver standards.

He assisted one of the re-insurers of the Twin Towers following their attack in 2001 and was appointed to the Cabinet Office Committee responsible for developing structural engineering related procedures as part of the Government’s anti-terrorist London Resilience initiative.

Much of his recent design work has been in the area of Sustainable Drainage (SuDS) and he has been involved in the design of over 60 SuDS projects involving Permeable Pavers in Ireland and in the UK.

His other interests include his work as Chief of a Ghanaian village where he and his students have installed a borehole and he continues to fund the John Knapton Library in his village of Ekumfi-Atakwa. In 2000, he drove a double deck bus from Newcastle to Ghana where it takes children from local schools to his library. He is also an after dinner speaker and occasional documentary presenter for BBC TV.